#60: Why Are You Not Making More Progress In Your Business? 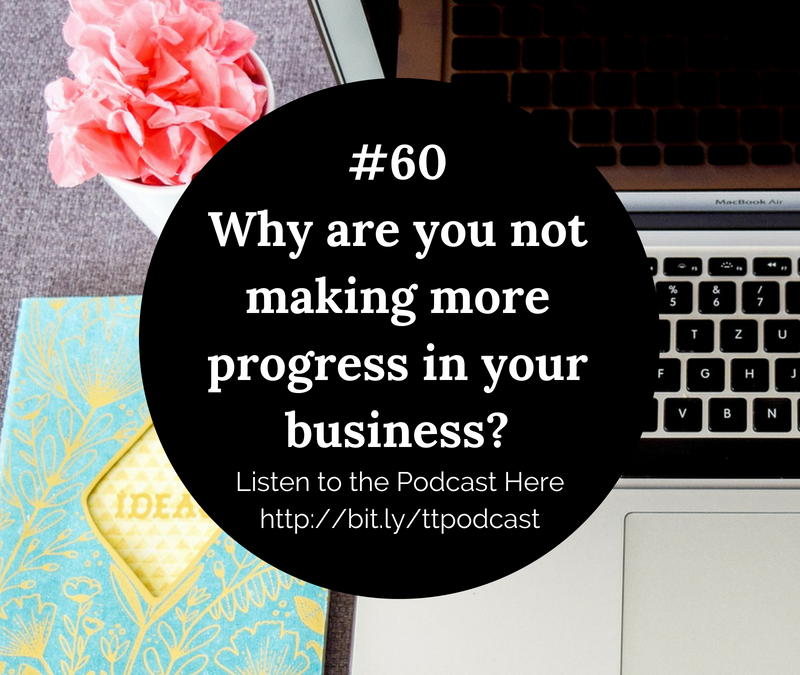 Do you give yourself a hard time about the progress you’re making in your business? Do you tell yourself you should be making more money, have more followers, have a bigger email list? You’re not the only one. I do too. In today’s episode, I share the simple strategy that helps me to stop beating myself up for my ‘lack of progress’.

I wanted to raise something with you today that you might think, ‘ew, oh please don’t Yasmin’. And it’s something that I say to myself a lot, and I pretty much think that every single business owner on this planet probably says it to themselves at least, once, twice, 10 times a day. What is that? It’s that age-old statement of I should be further along than I am right now. It’s when you’re not happy with the progress that you’re making, with the money that you’re making, with the impact that you’re making, and you’re giving yourself a hard time. Now there are two sides to this. First of all, we’re always aspiring to have more.  More money and to make a bigger impact, and that’s not a bad thing at all. But the second side of this is when it becomes a stick that you beat yourself up with, that’s not a good thing. Because now you are cutting off the divine intelligence that is coming to you, the creative inspiration that is due to you, but because you’re so annoyed with yourself for not being where you think you should be, you cut all of that off. It’s like you put a big wall up in front of you, and that stops you from actually receiving those creative downloads that could really help you to move your business forward.

So the thing is, you can use the statement, “I should be further along”, as a way to inspire you, but more often than not it’s actually the stick that we use to beat ourselves up with. So I’m not making the money that I should be, I haven’t gotten as many followers as I want, I haven’t got a big email list and Joe Blogs over there is making more money than me etcetera, etcetera, etcetera. You know the drill. You have this dialogue going on internally anyway. So you don’t need me to spell it all out for you. But you know that it’s not good for you. And you know that it’s hurting your soul, it’s hurting your spirit inside of you. Because when you start down that rabbit hole of guilt, shame, that you’re not where you think you should be, your soul, it’s so harsh, it’s a really harsh energy. And that stops you from doing your best work. It really does.

So what should we do about that? How do you get around that?

So first of all, forgive yourself and say, ‘I’m okay that I’m not making the money that I want to be making’. Because with that you’re surrendering. You’re creating this space within you that says it’s okay.

There’s a guy who does transformational work called Kyle Cease and he’s a former comedy standup and now he does comedy and transformational work. Check him out on YouTube, he’s brilliant. And he talks about the fact that when you accept where you are right now, everything starts to open up for you rather than fighting and resisting. So yeah you’re not making the money you want, and you’re okay with that. You don’t have the email list that you think you should have, and you’re okay with that. Immediately within your body, you create this sense of ease and sense of relief. You’re able to breathe. Yeah not making the money I want, and I’m okay with that. Yeah, I haven’t lost the 10 pounds that I wanna lose, and I’m okay with that. It gives you that sense of relief and it gives you the permission to just stop giving yourself such a hard time. And that acceptance is huge because it does allow you to then move forward. Because you think you should be somewhere, but the universe has a grand plan for us. And so just because you’re not where you think you should be doesn’t mean that there isn’t a bigger plan in store. And sometimes these obstacles, they’re just little detours and that we’re just taking a little bit of a longer way around to get to where we wanna be. But everything is perfect as it is right now.

The Hawaiian Huna method is brilliant for this because it’s very simple, three statements. I’m sorry, I forgive you, I love you. And it’s beautiful because what you’re doing is you’re saying sorry so you’re taking ownership, I forgive you so you’re creating that space and you say now listen, I forgive you. So you’re forgiving yourself in this instance. And then I love you, so you’re reconnecting to the love of you and the love of the universe and everything that is essentially love anyway. So you’re reconnecting with that. And what you’re doing is you stop giving yourself a hard time, you stop beating yourself up with a stick, and you treat yourself with love, you treat yourself with compassion, and you accept where you are so that you can then move forward with a fullness of spirit rather than oh I should be further along, I should be further along, bang bang bang bang bang, and all that happens is you just go further and further down that rabbit hole. And if you’ve ever tried this before you’ll know that when you focus on how to make yourself feel better and you do things that make you feel better, that raises your vibration, whether it’s dancing or playing with the kids or just going and running or going for a long walk or going on the beach, then what you’re doing is you’re just accepting where you are and that opens up opportunity to you. You may not be able to see it immediately. That’s okay. Trust it is there.

So the next time you tell yourself, I should be further along, I should be making more money, I should have a bigger email list, I should have more clients, just take a moment, forgive yourself that you’re not there, accept where you are right now, and know that it’s absolutely perfect. You are exactly where you’re meant to be and it’s all good. And myfavourite affirmation that I like to use is very simple. All is well. All is well.